When I saw the original advertisement  for the Ember coffee mug, I was drawn to it like a Seattleite to a Starbucks. I knew that I had to get one and would then inevitably spend my weekend trying to figure out precisely how it works.

The Ember travel mug is a $149.95 tech version of the venerable hot beverage mug. It has a simple value proposition: with an Ember mug, you can consume your beverage precisely at your personally-selected perfect temperature. Unlike traditional mugs, where the beverage is too hot at the beginning and too cold at the end, an Ember mug gives you the ideal temperature for the entire drinking experience. If you're spending $3.50 a day for such beverages, that's over $1,000 a year. What is $150 for a device that will make each consumption experience perfect?

At $150, though, a real-life teardown would be too spendy for my taste. My alternative was to perform a virtual teardown by making measurements on the mug, speculating how it works, modeling it with SystemVision, and adjusting model configuration and parameters until the simulations and real-life measurements matched. Below is what I discovered.

I was intrigued by the claim that the Ember mug could keep my coffee at the PERFECT drinking temperature. This is trickier than it sounds, since it means that the control system built into the mug would need to both heat and cool the liquid. Most beverage mugs are optimized to simply maintain the existing temperature, typically by thermally insulating the liquid from the outside world. But that means the liquid will start out too hot and then gradually cool, only passing through the ideal temperature briefly.

The Ember mug tackles this problem by providing a mechanism for both heating and cooling. The heating mechanism is a straightforward electro-thermal heating element. But the cooling mechanism is, well, much cooler! The mug uses a patented   approach, encasing the mug with a phase change material (PCM). Thermodynamically, the beverage is cooled by transferring energy from the hot liquid to the PCM by progressively melting the PCM (changing its phase from solid to liquid, with the resulting transfer of the heat of fusion from the coffee to the PCM).

Figure 1 shows the major components of the mug, including the phase change material. The overall system is beautifully executed, with an elegant user experience and phone app that is connected via Bluetooth.

The Thermodynamics of Phase Change Materials

Picture the PCM as a jacket of paraffin that quickly starts melting when a hot liquid is introduced into the mug, transferring energy during the phase change (melting). When any solid material is heated, its temperature increases until it reaches the material's unique melting point. Then, even as additional heat is transferred to the material, its temperature remains constant, at the melting point, until all of the solid has become a liquid. For a coffee mug, this means that the hot coffee that is poured into the mug will almost immediately melt the PCM and the coffee will drop in temperature to the melting point of the PCM. Additional heat can then be added to the coffee by the mug's electro-thermal heating system, thereby raising and maintaining the temperature of the coffee (and the liquid PCM) at the desired temperature. 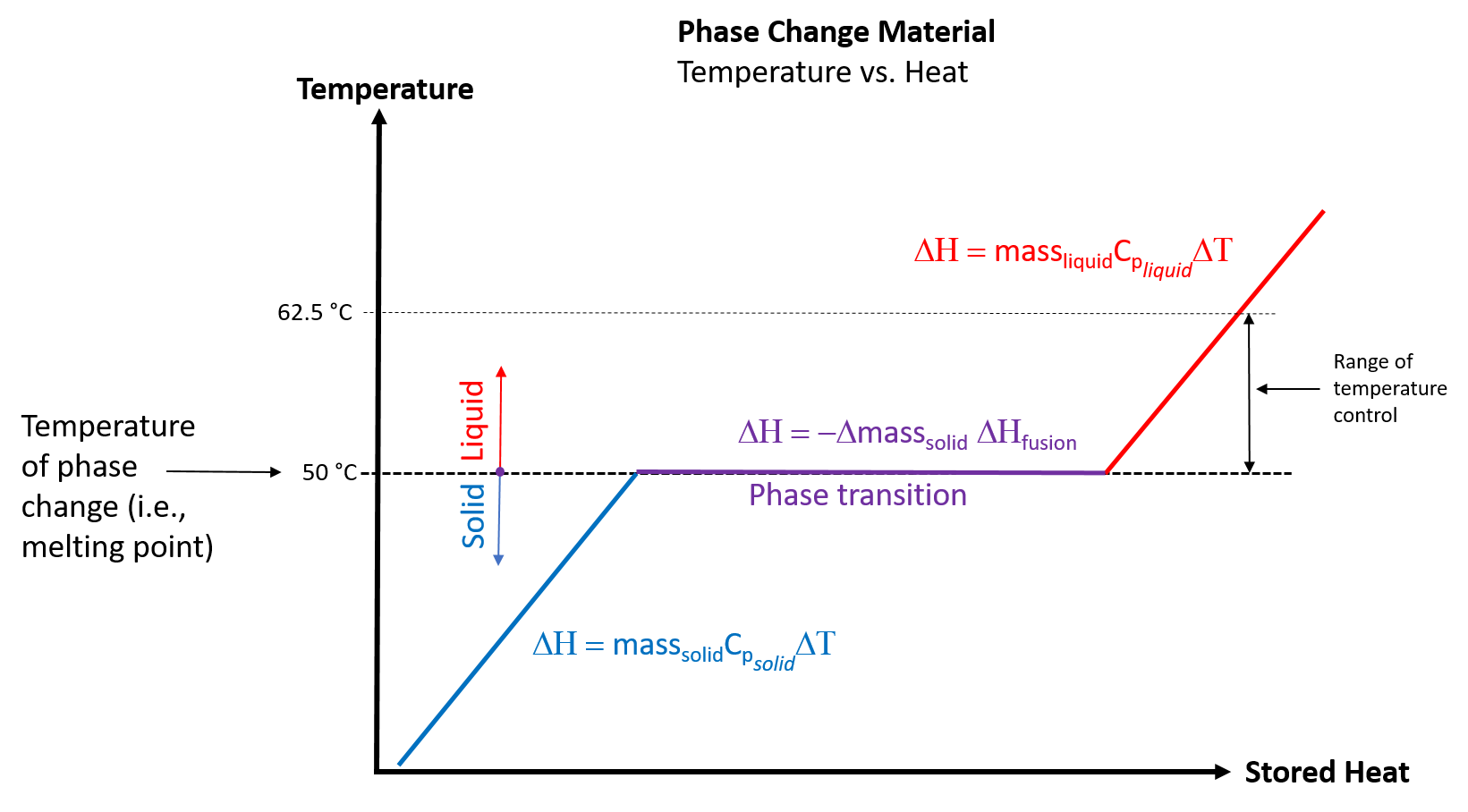 Figure 2. Temperature versus Stored Heat for a Phase Change Material

SystemVision Model as a Virtual Teardown

The SystemVision schematic, below, is a virtual teardown of the mug via a set of SystemVision models. Let me emphasize that this is entirely my conjecture about how the mug's components are functionally related—I don't have any inside information from the people at Ember. The resulting model agrees well with my measured data, so it's possible that I guessed correctly, but it's also possible that other combinations of the configuration and parameters would produce the correct results.

This model in Figure 3 simulates the process of filling the mug with a hot liquid and maintaining it at the setpoint until the battery is depleted. One of my original reasons for modeling the mug was so I could estimate the impact on battery life of increasing the maximum allowable temperature setpoint (currently 62.5C / 145F).  I determined that the maximum could be easily be increased by a few degrees with an acceptable decrease in battery life.

This circuit model includes modeling the PCM. From the measurements used to characterize the actual device (see Figure 4), it appears that the PCM contains multiple melting-point materials: thus two materials were included in the model, at melting points of 47C and 52C. The thermal mass of the liquid is modeled by the block in the diagram with a coffee-cup symbol. The feedback control is simple proportional gain. Since the wall charger output voltage is approximately 20 V and should be slightly higher than the battery pack, it is assumed that the battery pack has 5 Li-ion cells in series for a total battery voltage of ~17 V. The battery cell capacity was estimated, from measurements on the real-life temperature profile over time, at 130 milliamp-hour capacity for each cell, giving a total of 650 milliamp-hours capacity.

The VHDL-AMS language and the SystemVision simulator support the concept of modeling physical systems, including the concept of conservation of energy. This is accomplished via a physical natures language construct: electrical and thermal natures are just two of the many supported natures. The red wires in Figure 3 are for thermal nature modeling, with temperature as the across variable and heat flow as the conserved through variable. Black wires are for electrical nature modeling, with voltage as the across variable and current as the conserved through variable. The green wires are directional control signals (modeling the control system variables). In the real mug, the green signals and their associated blocks are implemented as software and I/O for the mug's microcontroller.

The purpose of the circuit model in Figure 4 is to calibrate the individual modeling elements that compose the larger circuit, including the thermal impedance of the mug insulation and the phase change materials (PCM) that are used in the Ember mug.

The following experiments represented by this circuit model were passive—the Ember mug was powered off during all of these measurements so that the intrinsic characteristics of the materials could be observed and characterized.

The temperature represented by the node ember_temp_exper is experimental data collected from an actual Ember mug. For this experiment, 350 ml of water at 81.9C was added to the mug and its temperature was measured over several hours. This data was entered into a SystemVision piece-wise-linear source model so that it could easily be compared to simulations.

The temperature represented by the node insulated_temp_exper is experimental data collected from an ordinary insulated mug of approximately the same size: 400 ml of water at 81.9C was added to this mug and its temperature was measured over several hours. The data was also entered into a source model for easy comparison.

The thermal network shown in the lower part of the circuit diagram in Figure 4 models the thermal characteristics of the Ember mug. This includes the thermal mass of the water, with its heat capacity (Cp), the two PCM blocks, the thermal impedances, and the ambient temperature reference. The thermal capacitor is used only to establish the initial conditions of the simulation, but it could also be used to model the thermal capacitance of the mug body.

Two instances of the PCM model (see the symbols with a miniature phase change diagram) are used in each of the circuit diagrams. since the experimental data appears to show two distinct inflection points in the temperature decay. This indicates that there are two separate PCM materials with slightly different melting points. This may be by design or it may simply be manufacturing variation.

The virtual teardown was a success! The SystemVision model nicely matched the measured performance of the Ember mug. The phase change material, which is the most novel feature of the mug, was successfully modeled using the IEEE standard VHDL-AMS language. And I saved $150 by avoiding a real-life teardown.

SystemVision has a large collection of ready-to-use models in a library, so much of the circuit models above could be constructed using off-the-shelf individual models. The library, however, did not include a model for phase change materials. This is an important effect for the Ember mug, however, so I needed to develop a PCM model.  The IEEE Standard VHDL-AMS code follows:

Which of the following categories interest you?